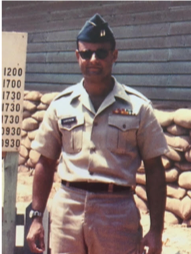 Lotstein planned to join the family business after his service. When he enlisted, he requested his assignment be in food services. The Army was extraordinarily accommodating and when at Fort Lewis, Washington, he was assigned to the General’s staff, G-4, as the Food Advisor responsible for the feeding of 10,000+ soldiers on the base. In Vietnam, Lotstein was assigned to the First Logistical Command and given the assignment working for both the United States Army and the United States Agency for International Development with the task of fostering the Vietnamese produce industry with the purpose of developing produce as a major export item for the country to generate foreign currency. Lotstein was responsible for purchasing 40 tons of produce daily for consumption by the allied forces. Lotstein remains eternally grateful to the United States Army for literally going out of their way to address his request giving him challenging and rewarding positions in the field of his choice.