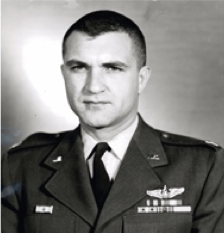 In March of 1966, Major Stuart M. Andrews was the pilot of an O1E aircraft and his observer-intraining was 1Lt. John F. Conlon III. Andrews and his observer were sent on a cross-country visual reconnaissance mission in South Vietnam.

The O1E “Bird Dog” was used extensively in the early years of the Vietnam War by forward air controllers and provided low, close visual reconnaissance and target marking enabling armed aircraft or ground troops to close in on a target. The O1E was feared by the enemy because he knew that opening fire would expose his location and invite attack by fighters controlled by the slowly circling Bird Dog. The Vietnamese became bold and when they felt their position was compromised they attacked the little Bird Dog with a vengeance in order to lessen the accuracy of an impending strike by other craft.

Andrews and Conlon departed Qui Nhon Airfield on March 4, 1966 at 3:20 p.m. At 3:40 p.m. they made radio contact with a Special Forces Camp in the area and were asked to check campfires that had been spotted. That radio contact with the Special Forces camp was the last word anyone heard of Andrews and Conlon. There was, at that time, no indication that anything was wrong, but when the plane failed to arrive at its destination both men were declared missing. When 591 Americans were released from prisoner of war camps in 1973, Andrews and Conlon were not among them. On December 1, 1977, almost four years after the end of the war, the Defense Department officially changed Andrews’ status from Missing in Action to Killed in Action. Stuart M. Andrews was promoted to the rank of Colonel during the period he was maintained missing. On June 13, 1978, a formal burial with military honors was held for Colonel Andrews in Arlington National Cemetery.

In August of 2005, a villager who lived in a province close to where Andrews’ plane went missing reported to officials that he knew the location of a single-engine plane that crashed decades earlier. On February 6, 2006, the joint POW/MIA Accounting Command (JPAC) located the crash site and began an archaeological dig uncovering over fifty pieces of evidence including Colonel Andrews’ Dog Tags. On September 15, 2006, over 40 years after his plane disappeared, Andrews was positively identified.